Self-Hypnosis for fun and relaxation

I try out a lot of different methods of seeking access to the well of creativity that is known as the unconscious but one of the strongest and most interesting that I have been experimenting with lately has been self-hypnosis. Of course I had known about the  concept of self-hypnosis forever, or at least I thought I had. Really I think my ideas about it were more influenced by movie clichés than anything else. You know the script – some weird guy, usually a villain swings a gold watch back and forth . . . you are getting sleepy . . . very sleepy . . . .

My basic assumption about hypnosis was that it sounded kinda scammy. Like you would go to a hypnotist and they would hypnotize you into giving them all your money or something. Also I understood that hypnotism was, these days, most often used to help people lose weight or quit smoking. I thought the idea of a hypnotist planting ideas in your head that you weren’t conscious of, like . . .”You no longer like cheeseburgers . . . cheeseburgers taste like poo poo . . . ” felt weird, and kinda creepy. OK, so maybe I have trust issues.

So I figured – why not try self-hypnotism, that way I get over my squeamishness of having some stranger muck about in my head. It turns out that self-hypnotism is super easy, and it is really nothing like that sleep-walking, “you believe you’re a chicken” state that movies and TV portray. It’s actually just a really easy way to get into a trance state.

The fact is you have been hypnotized before, you were probably hypnotized recently in fact. Think of the last time you deeply spaced out while staring into a fireplace or a campfire, or out the window of a moving bus or train, or spaced out watching moving water. Self-hypnotism is doing the same thing except you get into that dreamy relaxed state by talking yourself there. 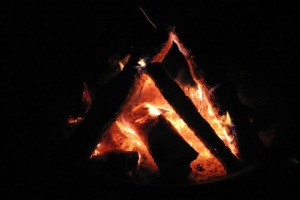 There are dozens of “induction methods” used to get into the trance. A lot of them involve visualizing yourself sinking down, either as a feather drifting downwards, or a pearl cast into the ocean sinking down, or you can imagine yourself walking down a descending staircase. As you sink deeper down you relax, both consciously and unconsciously, physically and mentally.  Obviously this only work if you are seated or laying on a couch comfortably, with few distractions. You wouldn’t want to hypnotize yourself at the local Starbucks.

You can think of self-hypnosis as basically “OKAY, I’m gonna relax AND I’m going to pay attention to what my mind does while I relax, because it’s going to be cool.” See, it’s really no big deal.

One of the most straight forward induction techniques goes like this:

1. lie down on the couch. You can play some relaxing drone music if it helps.

2. Relax but hold your right hand up in the air. Making a fist. Imagine you are holding a ball of energy in your hand. Tell yourself that the tighter you squeeze your hand the more relaxed the rest of you will become.

3. Do this for 20 breaths. Feeling yourself become more and more relaxed while you clench you hand, it helps to talk out loud while you do this. After 20 breaths relax your hand completely and let yourself go.

4. With a little practice you will find that this short simple technique ( it takes like 5 minutes will put you in a strange super-relaxed day-dreamy state. Try it! It’s surprisingly easy.

Now there is a lot of literature out there that talks about what to do once you reach this trance state. Basically most of it involves giving yourself repeated messages while you are tranced out and highly suggestible, to do self improvement stuff like quit smoking, stop eating so many donuts, get over your fear of spiders et cetera. that’s cool and all. But I think this trance state is interesting in and of itself, and you =should just try it to experience it first. Then once your familiar with it you can try messing around with “subliminal messaging” if you want.

Really it’s worth experiencing just because it’s incredibly relaxing and refreshing, it also gives access to the daydream world with great clarity. it’s one of those things that is hard to describe except by comparison ; but if you have ever really zoned out while taking a shower, or driving on the highway late at night, or staring into a fire, or dancing  for a long time, or even playing music, then you will recognize the feeling immediately. It is also accompanied by an odd heaviness to the body, the limbs, and I feel like my head and face somehow feel larger than usual, a feeling that I also get when I do acupuncture, but that might just be me.

In short it is easy to do, takes very little time, totally free, very relaxing, and everyone should try it. Rather than follow the preconceived script of what hypnotism is, I encourage you to just try it for yourself, and play around, maybe there are ways to use this state of mind that are still waiting to be discovered?

3 Comments on “Self-Hypnosis for fun and relaxation”