Again, this isn’t really a blog post this is me working out ideas for a workshop I am doing for The Projects this weekend.

You see, I think that stories happen ( I mean the way they occur to us) in a non-chronological order. At least they do for me. That is what I want to explore with this workshop, and so I’m working out some notes here.

A lot of writers talk about stories that way. (I mentioned Nabakov in the previous post.) That an image or foggy picture comes to you, and you know that you want to use that in the story but you might not know if it is the beginning, the middle, or the end.

For example, I was riding my bike over a year ago and an image came to me: A girl with a short sword, and wearing a robe that looked like she was Greek or possibly Roman and she was fighting a gigantic robotic lion. The image just flashed into my head like that, fully formed. I immediately pulled over on the rode and began taking notes because I knew that this would be an incredible image for a story . . . I didn’t know what story, and I didn’t know if it should go in the beginning, middle, or end. And that didn’t matter. We don’t need to know the chronology of the story when we start. Since then that image has grown into a 100,000 word YA novel that I have finished the rough draft for!

So here is the exercise I am working on. Take 4-5 images ( you can draw them, or cut out pictures from somewhere) shuffle them face down. Deal out three in a sequence, and for practice see what story you can come up with. Here is an example: I’m just going to use pictures of myself because that’s what I have on hand, and it’s faster than drawing. 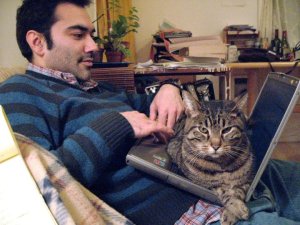 Anthony Alvarado smokes a pipe on the beach 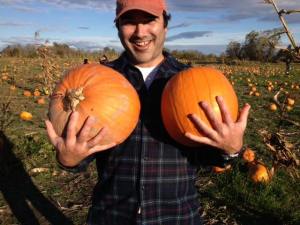 OK, here is how it works. We humans LOVE stories. It is like we are hard wired for narrative.

The idea here would be to shuffle these pics up and deal out three in any order, and then try to make up a story from the result. Let’s say I shuffled these pics (on cards) and then dealt out:

B: Anthony has Cat Computer

So, the story might be Anthony meets Ursula and she says “Hey buddy, you know you got to try writing Sci Fi with a cat on your computer! It’s fantastic!” And so he does and ends up writing a prequel to The Matrix.

OKAY . . . that story isn’t going to win an O. Henry award anytime soon. But it’s just an example, and you get the point!

Play around with it. Make it your own. Make up your own cards, images, pictures . . . the results are infinite.