Brooklyn has a wizard for hire. His website offers occult consulting. His name is Devin Person and he has gone full wizard. I first became aware of this Person who one newspaper calls the “Weed-smoking Brooklyn wizard” after noticing his work featured over at Tarot Society. He seemed to be coming from a place that was paradoxically quite funny and yet serious about magic at the same time. That really piqued my curiosity. I reached out in this interview with Devin to find out—what does it mean to be a modern day wizard?

Did you gradually turn into a wizard or did it just happen one day — like you woke up and realized holy shit I AM a wizard!

There’s a concept in thermodynamics that Ilya Prigogine put forward that thinking of things in terms of “being” is really misleading, since everything is actually in a continuous process of “becoming” something else. Hot coffee is becoming cold coffee, a baby is becoming a toddler, and I am becoming a wizard. This is literally true since the archetypal wizard tends to be wizened, and I’m only 30. So while I most certainly AM a wizard, I’m also still in the process of becoming one. The span of time that process takes was also chosen intentionally since I’m a bit of a slacker and I like the idea of having until I’m 80 to “become what I want to be when I grow up.”

That being said, I was exposed to magic when Grant Morrison’s Arthur magazine interview blew off the back of my head at age 18. I started exploring esoteric eccentricity, reading half of Donald Michael Kraig’s Modern Magick and trying to do daily lesser banishings of the pentagram in my garage, which amused my roommates to no end. Eventually my magic became more or less a private practice until I moved to New York and took a moment to marinate on the question, “What’s the most ME thing I can be?”

Well, I’ve got a tattoo of a wizard on my arm, I’ve spent a lot of time contemplating the paradoxical nature of magic in a modern context, and New York is a city where you can be whatever you badger people into accepting you as, so I decided, “Okay let’s do it. Hey everyone, I’m a wizard now.”

Of course, being a wizard, I used ritual magic to summon a more wizardly version of myself, and that transformation into an actual, semi-factual wizard took about a year. It’s all detailed in this Pecha Kucha presentation I gave a few months ago. 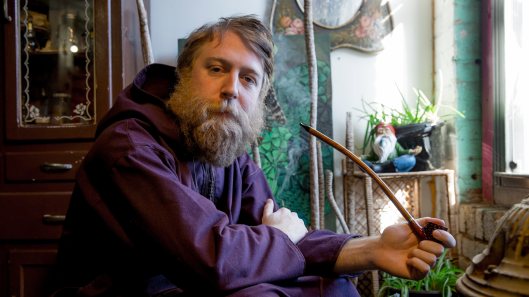 Do others need to believe in magic in order to get benefits from what you do?

Nope! Wizard operate outside the normal perspective of the community they’re in, which worked in the past when boundaries and belief systems were more rigid and defined. These days, no one knows which way is up but I’m a wizard, not a guru or spiritual teacher, so no one needs to believe anything I say.

In fact, if I was going to give anyone advice about listening to what a wizard says, I’d say don’t take things too seriously and keep an open mind about what resonates with you. Art doesn’t have to be logical and narratively structured to convey meaning and emotion; wizardry works best when you keep things light and fun, avoiding the snares of dogma and self-seriousness.

What are some of your favorite resources for the budding? wizard (books, albums, movies, websites, strains of weed etc.)

by Robert Anton Wilson was the first thing I read after I picked my brain off the floor from reading that Grant Morrison interview. Wilson is fantastic and that’s a great place to start for the newly curious. Early on, I read a lot of psychedelic comic books, so Morrison’s The Invisibles is a really fun way to explore magic principles in the context of a compelling narrative. Alan Moore was hugely influential, and he continues to be so to this day since I read his essay “Fossil Angels” two months ago and had my mind blown all over again.

In terms of movies, we live in a culture saturated with the influence of Joseph Campbell and generations of screenwriters striving to emulate the hero’s journey, so I suggest listening to Campbell’s incredible lectures (they’re on Spotify!) and then applying that lens to whatever media resonates for you personally in the larger cultural landscape.

Seriously, how seriously do you take yourself, seriously?

When I’m considering new projects, I strive to only do what makes me crack up. If I’m not laughing out loud, if I’m not giddy with anticipation for others to encounter my work, I take that as a sign I’m doing something wrong. Then I work to figure out why things stopped feeling fun and started feeling like work.

For example, I was getting stressed about my Kickstarter to publish my book until I had the idea to just do a campaign to raise $420. That idea was so stupid it kept me laughing through all the work required to actually do a Kickstarter, and in the end I raised four times as much and now my book is getting published.

There seems to be a renewed interested in magic and the occult. Why do you think that is?

I think that’s true, this interest in the occult goes in cycles. Renewed interest from when? The 1960s and 1970s when Led Zeppelin was buying Crowley’s old possessions and single men were running the pickup line, “What’s your sign?” into the ground? Or renewed from the turn of the century when Theosophy, spiritualism, and seances were all the rage

We’ve always been fascinated by magic and the occult. Like religion, art, and science, magic is a way of looking at the world. I think magic is interesting because it embraces paradox, is comfortable with confusion, and tends to be holistic and subjective rather than empirical and objective. So, in a world where there is no “default perspective,” the idea of embracing that uncertainty has significant appeal. 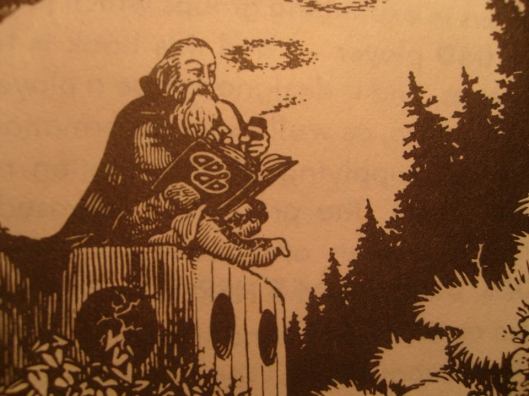 Do you think that the internet and technology are totally compatible with wizarding? Aren’t wizards supposed to be like, living off the grid, in a forest, in a straw thatched hut?

Arthur C. Clarke said, “Any sufficiently advanced technology is indistinguishable from magic.” Lately, I’ve been thinking of magic as a mystery box of new technology that we don’t fully grasp yet, or is only understood by specialists. Back in the day, alchemy was a weird mix of arcane philosophy, proto-chemistry, and nonsense. We’ve pulled a lot of that proto-chemistry out of the mystery box and explained it with science, so if I throw flash powder on the ground, people will say, “Well that’s just how those chemicals react. That’s not magic.”

But if you didn’t know chemistry, my ability to produce smoke and light from a powder might astound you. That could be easily categorized as “magic.” So I think internet and technology are absolutely the best place a wizard can be. If we think of magic as crystals, candles, and old spells invented by Gerald Gardner and the Golden Dawn, what does that do for us? Does this affect reality in a way the ancients understood but modern science is blind to? Maybe, but that strikes me as a bizarre stance to take seriously. Magic does itself a disservice by trying to operate under the guise of science while failing to live up to its standards.

A marketer, on the other hand, is able to use images, words, and a Twitter account to get people excited about a new movie. How did they convince a large number of people to care about watching Seth Rogen get high with some new CGI creation? There’s the old marketing quote attributed to John Wanamaker, “Half the money I spend on advertising is wasted; the trouble is I don’t know which half.”

We don’t know why advertising works! It’s just that some of it does, and some of it doesn’t, which to me sounds like the state alchemy used to be in. So while I love the old-time aesthetics of magic, mysticism, and the occult, I care far more about the visions of the future I see in my computer screen than fighting to prove dowsing rods are a legitimate technology.

How important is the weed wizard connection? What about other psychedelics? Is it possible to be a stone-cold-sober wizard?

While I enjoy smoking pot, I think blunts make about as much sense as buttering bread with a broadsword. You want real insights, use weed like a scalpel. If you want to actually get something out of the marijuana experience, smoke a small amount, like one hit, then close your eyes and just chill. Let your mind wander. Listen to ambient music and zone out.

This provokes anxiety in a lot of people. Good. This meditative approach to marijuana is like going into the basement of your mind with a flashlight. If the light reveals there’s a bunch of old junk down there, you’d do well to clear it out! Shutting off the flashlight and ignoring the junk isn’t the solution.

So I say make repeated trips, get used to those anxieties, and slowly make some progress clearing things out until you can get a little bit high without that sense of unease. Marijuana isn’t making you anxious; it’s making you aware that you are already anxious.

Of course, pot is fun in other situations and psychedelics are useful too, but the important aspect I’ve found, which I think is often ignored, is acting on what you’ve learned. I equate psychedelic experiences to a tarot card reading. A good tarot card reading can produce some spookily accurate insights. But if instead of taking those hints and acting on them, you just shuffle the cards and go again, well now you’ve got mixed results. The first pull said this was a good time to be alone, and that felt true. The second pull says see your friends more, so now you’re not sure. Either way, sitting around doing tarot readings will never solve any of your problems.

This is all my personal opinion and should be regarded as the rantings of a known eccentric, but I say the same concept should be applied to the psychedelic experience. Do drugs sparingly, but hold their lessons for a long time. Take mushrooms with your friends on a camping trip, then return to civilization full of inspiration. Let the ideas you encountered in that psychedelic state take time to actually affect your life before you go for another round.

It’s appropriate that we call these experiences “trips,” because like a good vacation, they help you examine your life from a new place, a new perspective. But after a vacation, you have to come home and get your house back in order.