This isn’t a blog post, this is me taking notes for a workshop I am planning—but please, feel free to look over my shoulder. That’s what this blog is all about.

I am teaching a workshop at THE PROJECTS a really cool 4 day event in Portland OR, for comics artists. (I have said this before, but I will say it again: Now is an amazing time to be a comics artist. From what I have seen as an outsider indie comics as a medium are really going through a revolution, a golden age right now. The richness and breadth of the work in comics is going on right now, the freedom, and experimentation is dizzying . . . and this while many artists in other mediums such as music, or I don’t know . . . novel writing, feel like their backs are up against the wall.)

I taught a workshop on designing homemade tarot cards at THE PROJECTS back in 2012 and it was a lot of fun. This year I want to build on that idea but try something different. 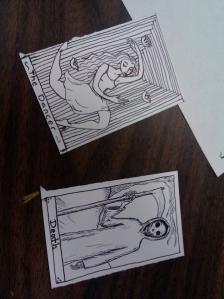 Here is me at the workshop making a really weird face while I eat an apple.

And here is Italian Spider man.

So, when I talk about harnessing randomness, what am I talking about? In a word verisimilitude. Life is often random, we can’t predict what is going to come next. Often when writers (whether of comics or fiction) plot out a story it can have a predictable feeling. How often have you watched a movie, or read a book, and been able to predict exactly how it was going to end half way through? What these stories lack is unpredictability. They lack stochasticity, (the characteristic of being random) chance, chaos. I am interested in tricks for adding that chaos back into the story.

There are a infinite variety of ways to do this. For example you could write a list of “what happens next” and then roll dice, draw straws, whatever to decide what happens next. But that is still too deterministic. I have also played around with using Tarot cards as a way to inspire ideas for the plot. What happens net, draw a card and interpret it. That works well, it is similar to what Philip K. Dick did in writing The Man in High Castle, he would stop at key points in the story and cast an I-Ching for each character to divine what should happen next. This book is considered is all time Magnum Opus. Chance?

This year I am interested in developing something that allows the imagination freedom to help interpret the dance, it is a little more similar to the method Nabokov used to write his stories. Each of Nabakov’s novels began as a stack of index cards. He would write short scenes, descriptions, bits of dialogue on the index cards, and proceed to work in this way not in chronological order, but in whatever order his fancy took him. Once he had all the scenes he wanted, all the pieces of the jigsaw he would then arrange it in the order he wanted.

It’s really a fascinating and incredible method. I plan to explore using that method to make comics in this workshop. We will work on one panel at a time, and then shuffle them up. The same 5 or 6 cards (panels) can then be reshuffled again and again to produce an endless and infinite recombination of stories.

You can play with these concepts anywhere, but if you live in Portland I hope you can come try this out!