Compare yourself to the Greats

I’m going to give you some bad advice. As a writer I think you should constantly compare yourself to the Greats. I mean the greatest writers of all time, the people who wrote the classics. I know that a lot of people would disagree with me, and would say it is foolhardy as a young writer to constantly be comparing your writing to the work of people like Rilke, Faulkner, Hemingway, Beckett etc. That to compare yourself to the greatest writers of all time would be daunting to say the least, and maybe even so intimidating it would make you give up all hope of ever getting good.

(In his memoir Papa Hem talks of comparing himself to the old Russian writers, and constantly trying to “beat” them at writing.)

But I have noticed that we writers tend to fetishize, and lionize our idols too much. We respect the work of the Classics so much that we start to think that these Greats were superhumans who could do no wrong, and everything they wrote was pure genuis. Which isn’t the case at all, frankly every writer I just named did pen a few stinkers in his day. The thing is we tend to remember people for their best stuff, not their failures.

Of course when I say to compare yourself to Hemingway, Beckett etc. that’s if you want to write great literary fiction. If you just want to pen massive best sellers you should compare yourself and your writing to Stephen King, J.K. Rowling, George R. Marin etc. I am serious, whoever you literary hero is, when you approach a scene you should ask yourself, how would they write this scene . . .and now how can I do them one better.

This is why reading a lot is so crucial to knowing how to write well. If you are a bookworm you already know what works and what doesn’t. This is also why writing can’t really be learned by going to workshops and writer’s groups. Because it is actually learned by reading tons of books. You are either a reader or you’re not, if you don’t read and you think you can learn how to write . . . good luck pal.

In most other endeavors people naturally compare themselves to the greats all the time. For example tennis novices will constantly talk of how to swing a back hand like Roger Federer. Because they are holding up an example of the perfect form to emulate. Aspiring writers should stop putting a wall between themselves and their idols, and instead ask : how can I do what they did, and write like they wrote?

Secondly, and this is a little but trickier: not only should you compare your writing to the greats but it is good to compare your life against theirs. Let’s say you admire Beckett above all other writers. Then you should ask yourself: what would Beckett do in this situation? One must take oneself seriously in order to make this sort of comparison, but it goes a long way to developing a sense of self and a seriousness of intent that is vital to good writing. In other words, comparing yourself to the Greats keeps you serious about what you are doing. An artist must never be apologetic about what they are. 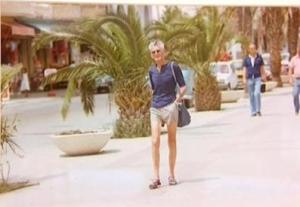 Beckett, Tangiers 1978. Check out those sandals!

It is good to know who your heroes are, as a writer. Here is a simple excerise. Make a simple list of 10 of your favorite writers of all time. Writers who you would be proud to be compared with. Keep that list in your desk drawer and look at it when you need motivation to try harder, to stretch for the highest apple on the tree.

Here is mine – obviously yours will be totally different! (and I’m not saying these are the 10 greatest writers of all time! just that, for me they are role models. They are who I train to compete with. I want to become just as good as my heroes, or die trying. Is that arrogant? Yes! Must a writer be arrogant? No, (consider Kafka) but it certainly helps.) 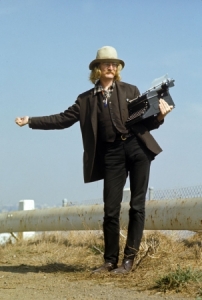