The next phase of magic to consider is a broad expanse, thousands of years from the ancient Egyptians and Babylonians to the Medieval ages. Of course compared to the millennia that magic was practiced in prehistoric times this is just a flash in the pan.

Of course in many areas the practice of magic remained virtually unchanged from the way it was practiced in prehistoric times. And it survives in a that form in similar places to this day. The forms of ritual and ecstasy as practiced by the modern day Siberian Shaman, Mapuche Maci, Peruvian Cuandero, bear a quintessential resemblance to the forms of magic and ritual practiced across all continents going back to ancient times, from Japan to Europe, to Africa, to North America. 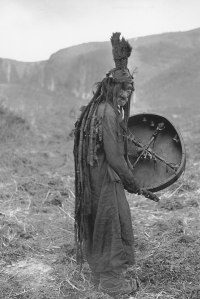 In the places where civilization and agriculture did not change society the primal arts of magic continued to be practiced, handed down untrammeled from generation to generation, in ways very similar to how they must have been practiced 5,000 years ago.

In the places where human populations became more dense we see the rituals of magic becoming codified into the priest caste. In short where you have cities you have organized religion. You also have the phenomena of the written word, which always a sacred text to be formed based on the visions, revelations, dreams, and epiphanies of the priests and prophets. This allows the teachings to move from being revelations particular (but infinitely repeated) to a generation, to become codified and passed on endlessly. In other words when you take primitive shamanism and mythology and “grow” it in a densely populated area the result becomes organized religion. Consider the complex cosmologies of the ancient Chaldeans, the Egyptians, the Israelites, the Babylonians, and Greeks. 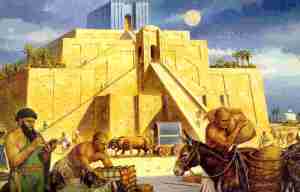 The important thing to notice is that at this point magic is still inseparable from any other branch of human thought or endeavor. It is a part and parcel of everything else— of warfare, governance, of the judicial system, of agriculture and so on. Indeed to a certain extant magic is almost invisible because it is seen as simply a part of the fabric of human reality itself, just as the gods and the gods and pantheons of neighboring races are viewed, as well as the spirits of the woods and the river. Mankind’s understanding of himself and the world was essentially a magical one.

The ever proliferating understanding and theory of the universe during this phase was equal parts “left-brain” and “right-brain”, equally “reasoning” and “intuition”, indeed there wasn’t really a dichotomy there to the mind of the ancients. From this holistic viewpoint the ancients developed Astrology, Numerology, Divination, Mathematics,Symbology, Quabbalah, Philosophy, Meditation, Yoga, etc. 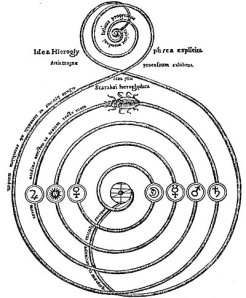 I won’t go into too great of detail on this mid-phase of the history of magic, because it is vast but not as important as what I want to look at next, which is the occlusion of magic in the modern age.

One Comment on “A Very Brief History of Magic (pt 2)”