The Sweet Science of a Daily Routine

I was talking with a couple of writer friends the other night at the bar. Yes, it’s true writers like to sit around and drink whiskey and talk about Norman Mailer, Italo Calvino, Cormac McCarthy and that sort of thing. For hours, which adds up to a lot of whiskey.

The conversation then turned to writer’s block. My friend B. complained that he hasn’t written anything for a year and a half, and that when he does write it’s usually just a paragraph that sucks, and he deletes it as soon as he is done typing it. The other writer present, an older and more experienced fellow said “Look man, if you’re not writing every day, you’re not writing.”

There is this weird Hollywood idea of writers, that it is something that happens in a mad feverish trance. You get inspired and then scrawl off a novel in the space of a few months. While I am sure that has happened a time or two in the history of the novel, it is by and large the exception. Vonnegut compares writing a book to inflating a blimp with a bicycle tire pump.

It takes a long ass time to create something out of thin air. I think this probably holds true for any creative endeavor, from music, to art, and so on—don’t fall for the cliche about inspiration. To write, or do anything well just show up, patiently, day after day, and work at it a little bit every day.

Boxers call it putting in the roadwork. Because you know what the secret to being Rocky is? You don’t win the boxing match during round 10 . . . you win it by training, and jogging up those museum stairs. Eye of the tiger baby! 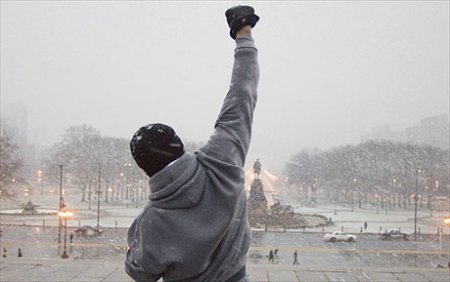 The key is to put in that hour or two, every day. And the key to putting in that hour is to make it automatic. Make it something that happens immediately after something that you do every day like wake up, or eat dinner, or get off from work etc. The trick with forming any habit is that it seems like a struggle at first, but after a little bit of time it becomes automatic, and you do it without thinking about it, like brushing your teeth. And then before you know it:

← On Landing an Agent, and other dragons
DIY makes Boing Boing’s top picks for Summer reading →